This project begins to establish a compositional hierarchy by negotiating order and disorder through a relationship produced between an ordered grid system and a disordered array of noise that releases figural and striated qualities that play out on different scales. From elevation, the hierarchy of the grid-based order translates to the interior. On the exterior, noise is established first, then the grid, which organizes the density of color, noise, and fragments in a way that levels and divisions can be read from the elevation. Inside, the poche “skeleton” creates a fixed system against the deployed fragments that mirrors this exterior hierarchy because the placement of these fragments are dictated by the poche. The design process for this project creates an interfacial dialogue between machine and human. The machine becomes a departure point for us as designers in the way that it is able to generate form based on its larger scope of intelligence. These generative forms are then interpreted with an architectural knowledge and bias. In this context, Prometheanism is a method of assembling seemingly insignificant elements in a very precise manner to produce meaning.  For example, this could be manifested through the simultaneous creation of poche, column, and wall. All three are indistinguishable from each other because these elements are only what they are ontologically simply because of the way that they act. The voxel geometries that we receive have no inherent meanings attached to them.. A column serves as a column but may fold into the poche, not in a plan typology, but in a superposition sort of way. Humans see these fragments produced by the machine and assume the function due to experiential bias. For example, this fragment could be seen as a column because of our preconceived notion of what it means to be a column, but that may not necessarily be its function. In some cases, these “column-like” elements actually take on the role of wall or poche. These roles can switch based on programmatic requirements. To further emphasize this, the project operates within a system of fixed and customizable elements. The fixed open-plan shell lends itself to be inhabited in an assortment of ways. We use the fluctuating functions of these deployable fragments to allow inhabitants to occupy the space in a way that embodies their personal or unique preferences. Hypothetically this could be achieved in two ways. One would be through artificial intelligence monitoring of the habits of the occupants. For example, the building might track one’s time spent in certain spaces, observe one’s circulation patterns, or determine spatial division based on occupancy count. The other strategy would revolve more around the inhabitant’s preferences in a real estate sense. In this model, occupants may purchase more space within the building to expand their unit. 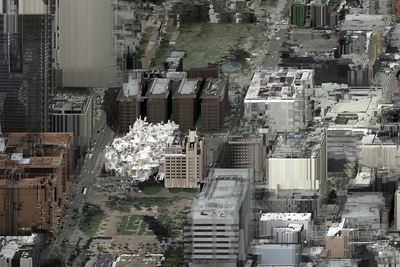 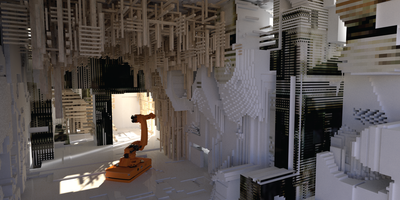 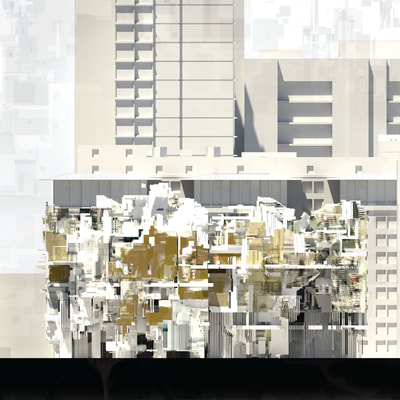 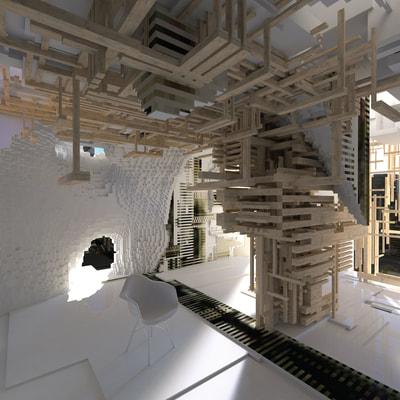 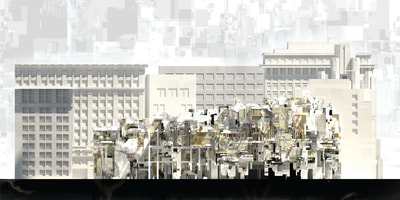